Political satires have always been a popular form of comedy but what happens when the comedy on a TV show starts resembling real-life politics? Enter HBO’s Veep. This Julia Louis-Dreyfus-starrer did not ask for it, but it ended up in direct competition with Donald Trump’s Presidency and was forced to make sure that the show was funnier than the statements the former POTUS put out with an enviable regularity. It came to the point when this political satire did not evoke real life, but real life evoked Veep.

Created by Armando Iannucci, Veep started airing in 2012 and ended its seven season run in 2019.

What is Veep all about?

Veep is a satirical comedy that follows politician Selina Meyer, played by Julia Louis-Dreyfus, as she tries every trick in the book to become President of the United States. Selina gets into the weirdest situations that have nothing to do with public policy, and the only thing that matters to her is her public persona. Followed by her team of buffoons, who seldom have good ideas, Selina is the kind of politician who just can’t catch a break.

Veep starts with Selina as the Vice President of the United States. Despite having the second most powerful title in the world, she is just a glorified ribbon-cutter. She eagerly asks her assistant, “Sue, did the President call?” on an everyday basis, but the answer to that question is never in the affirmative. Her sad state in the administration, combined with the actions of her silly staff, made Veep a gold mine of satire.

The secret to a great comedy is its ensemble cast and Veep excels in that department.

Tony Hale’s Gary is the star of that ensemble, despite some great competition. While in the early seasons, it was just the chemistry between Selina and Gary that made you laugh, the later seasons made Gary’s character much more than a ‘bag man’. The storyline with his family and the track where Selina just threw him under the bus for the misappropriation of funds had us rooting for Gary through and through. In a political show where all the characters are living in a ‘dog-eat-dog’ world, Gary’s simple-mindedness put him above the rest.

The two stand-out scenes where Gary and Selina’s complicated relationship had our attention were when she first finds out she is going to be the President and Gary finds her in the washroom, and the one where Gary spends exorbitantly during Selina’s first dinner in the White House.

While Veep started as a comedy that was completely fictional, America got a chance to see ‘truth is stranger than fiction’ being played out in real-time after Trump was elected President in 2016. Creator Iannucci had said back then that the comedy that they wrote for the show did not feel outlandish anymore because the real-life political stories were getting weirder by the day.

What works for Veep?

While Julia Louis-Dreyfus has been a master at comedy since Seinfeld, Veep brings out another side of the legendary actor. Out of the seven seasons of the show, Julia won Emmys for six.

Veep also perfectly balances its bizarre humor with its emotional heft. The show also acknowledges the real world problems like sexism, but they do it with a pinch of salt. Despite its political nature, Veep does not explicitly state its political allegiance, but in the true spirit of comedy, it takes a dig at everything that is political.

The overall story arc of Timothy Simons’ Jonah Ryan is probably the only long storyline that progressed steadily through the seven seasons of Veep. Other characters like Catherine, Dan, Mike, Amy, Kent and Ben had enough personality of their own that the show never had to rely on Selina to pull it all together. 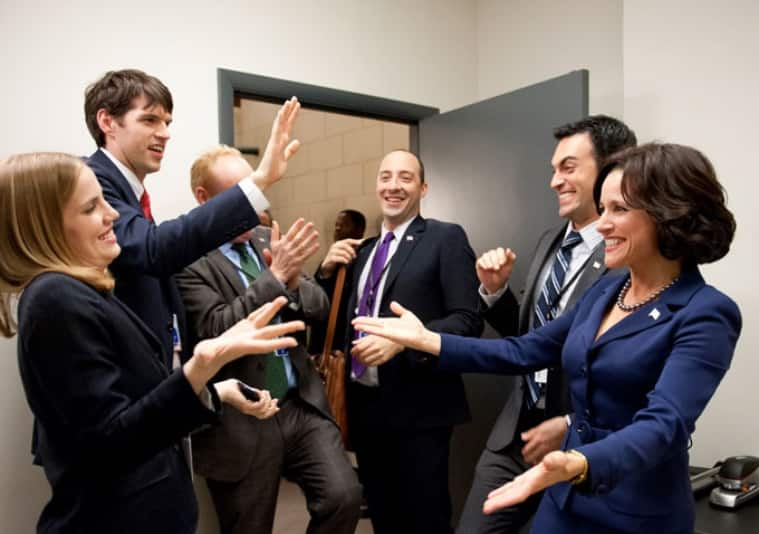 Veep had some great actors in its ensemble cast. (Photo: HBO)

The independent story arcs with Mike’s adopted baby, Catherine’s identity crisis, Amy joining Jonah’s campaign, and Dan working at a news channel had enough to keep us invested. And that is always the mark of a great show.

Over the course of its seven seasons, Veep won 17 Primetime Emmy Awards out of the 58 nominations it received.

Veep is streaming on Disney + Hotstar.