Kangana Ranaut has made such a statement in the past, which is being discussed till now. Now actress Swara Bhaskar has replied to him.

New Delhi, Feb 23: Kangana Ranaut is known for her outspoken opinions on social media. She does not write in hidden words, but openly write the names of people and wire them. Kangana has tried to drag Bollywood’s famous actors on social media, though she does not get a response from them. Kangna’s bravado becomes a problem for her at times. However, according to her, she speaks the truth, so she speaks boldly. Recently, Kangana gave a statement about the item number, which is still being discussed. Swara Bhaskar has surrounded Kangana on this. 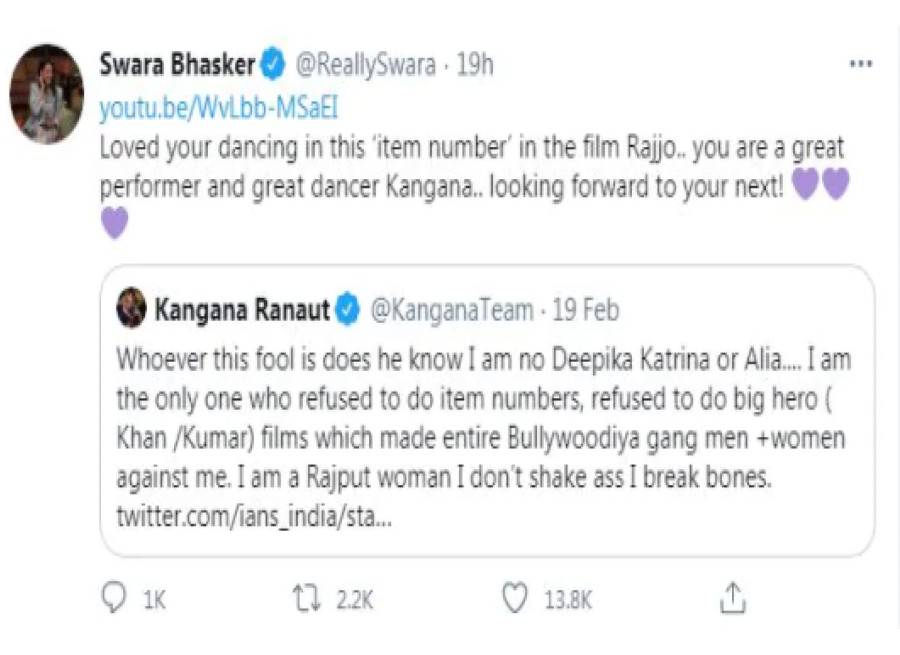 Kangana recently said that she refuses to do an item number on the screen. Swara Bhaskar tweeted a song from her film Rajjo, and wanted to surround her for this item number. But many people were seen in Kangana’s favor after seeing this. His fans said that Kangana did not have an item song in Rajjo, as Kangana was once playing the role of a dancer in the film and the song was a part of her story. 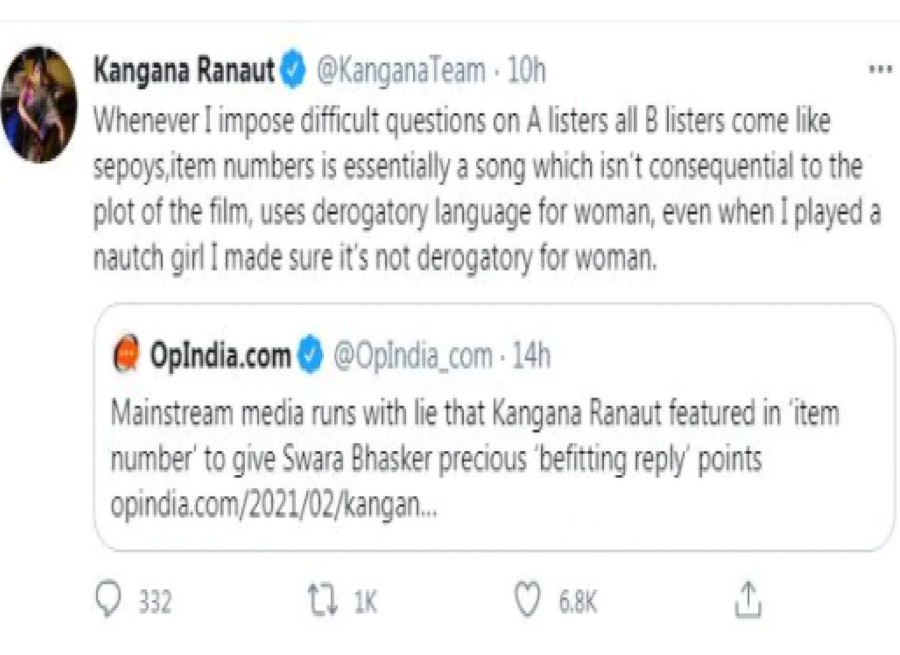 Including a news report in his tweet, he wrote, ‘Whenever I question A Lister actors, B Lister artists come to their rescue as soldiers. Item number one is a dance number that has nothing to do with the film’s story, in which abusive language is used for women. Even when I played the role of a naughty girl, I made sure that it was not insulting to the woman. ‘

Kangana’s attack
Kangana Ranaut said in another tweet, ‘These B grade will not make sense star, but I declined for the item song of Sanjay Leela Bhansali and Farah Khan, who made the star of A List an overnight sensation. I have put a lot of bets to reach here… ‘Actually last week Kangana attacked a politician for calling her a’ dancing girl ‘(item girl). He wrote, ‘Whatever this fool has said, he knows that I am not Deepika, Katrina or Alia…. I am the only one who refused to do the item number. The big hero (Khan / Kumar) refused to do films, because of which the entire gang of Bollywood has turned against me. I am a Rajput woman, I do not panic, I break bones. ‘ Swara Bhaskar had called the politicians ‘remarks quite wrong and condemned them as’ silly, lascivious, but Kangana has made it worse.